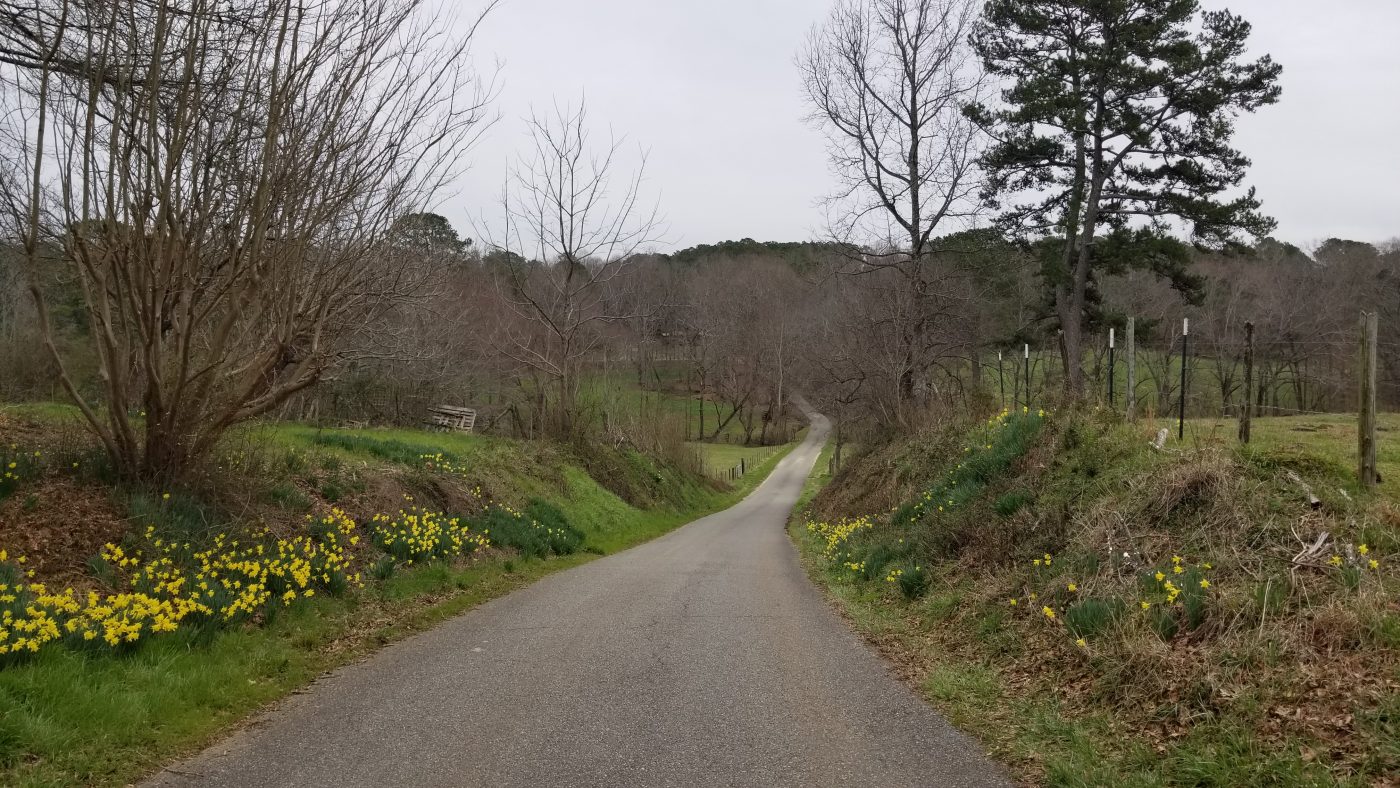 The paved Tower of Terror road route climbs and descends the hills northeast of Sosebee Cycling Park in White, Georgia. There is a tower but the only thing frightening about this 66 mile road route is a bit of chipseal. Expect lots of elevation change, some technical descending and virtually no traffic. The area has many interesting features including rushing creeks, a spring which pours out of the mountain and some truly bizarre roads.

The 100% paved Tower of Terror route starts at Sosebee Cycling Park in White, Georgia which is just a few minutes off Interstate 75. Most routes out of the cycling park keep to the rolling pastures north and west but the Tower of Terror route explores the hills ‘n hollers to the northeast. It is an extremely interesting area yet often overlooked as a place to cycle.

The route begins with a warmup through the old town of White with impressive views of Pine Log Mountain as the route heads northeast toward the hills.

The fun begins around mile 9 with lots of punchy hills, some steep grades and a genuinely twisty descent before dropping out of the hills for a store stop at mile 33. A seven mile section of Salacoa Rd is especially pretty. More hills follow the store stop and this being the south, a few miles of chipseal are thrown in for fun. The final 20 miles southward toward the cycling park are through rolling pastures more typical of routes which start at Sosebee.

Some of the roads on the Tower of Terror route will make you wonder what the builders were thinking. Hills don’t seem to be an obstacle and they either carved the road into the slope or paved over whatever was in the way. Most roads in this area probably started as horse trails in the early 1800’s. It all makes for some very interesting riding and the route is more difficult than it appears on paper.

As for the route name, yes, there really is a tower. It isn’t a theme park ride though it might be a terror to those who live next door. It is actually a poultry feed production facility which sticks out in the landscape like a sore thumb. A Water Tank of Terror supplies the facility and is passed shortly before reaching the tower.

Until recently, most of the chipseal encountered on this route was gravel. Exploration by SoutheastCyclingRoutes.com contributor Greg Hanchar revealed the new road surface and the tower of Terror route is the result. Most of the chipseal can be avoided and the route shortened to 48 miles by heading west on Highway 53 from the store stop.

7 thoughts on “TOWER OF TERROR”